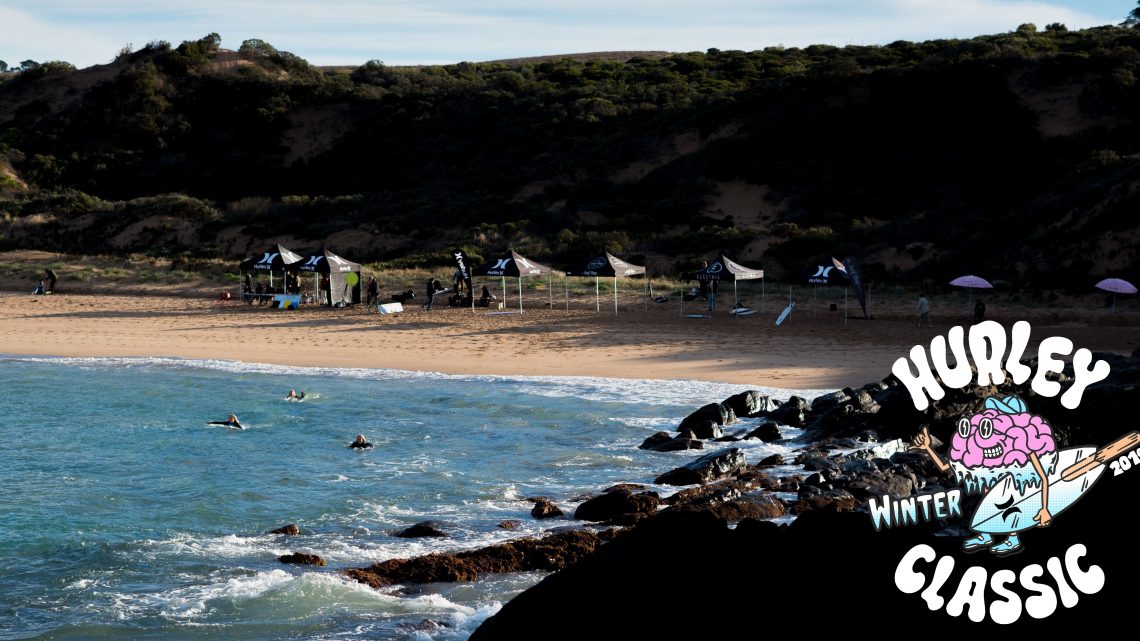 The 7th Hurley Winter Classic was run on Saturday 8th June at Parsons Beach in the Newland Head Conservation Park.

A dropping swell gave Hurley some nervous moments at sunrise yet the call was made to begin the arduous task of lugging the several tonne of equipment down the goat track. Five marquees, 4 trestle tables, monitors, tablets, one generator, multiple flags, umbrellas and other paraphernalia that is required to run an aesthetically pleasing surf contest were laboured into position. Heat one was underway soon after which set the tone for the day with Blake Levett of Manly scoring one of the best waves of the day in clean two foot conditions. The swell may have been smaller than previous years yet the light offshore were very much welcomed along with the warmth that the winter sunshine provided.

A glorious bank provided consistent rights and lefts all day with some excellent scores dropping. When the Women’s final hit the water it was Lily Macdonald (Freshwater, NSW) and Amy Gore (Cristies Beach, SA) traded rights and lefts all heat to be out in the lead. It was the combination of Amy’s consistent and smooth backhand attack on the left that provided the scoring potential she needed to edge out Lily.

Blake Levett and Khai Adams made up the Men’s final. It was the best display of surfing the crowd had witnessed all day. As the heat progressed the two in form surfers of the day traded excellent scores with the lead changing several times. The South Coast Boardriders were in full voice hurling screams ocean bound with every trademark blow tail turn. At the buzzer it was Fleurieu’s own Khai Adams taking his 3rd Hurley Winter Classic victory adding to his triumphs in 2013 and 2016.

Hurley look forward to seeing you all again in 2020!

Next post SBIA AWARDS SPOTLIGHT | SHOP FIT OUT OF THE YEAR

Previous post How To Insure Your Business: Protecting Your Operational Capability And Cash Flow