A Short History of Ear Plugs 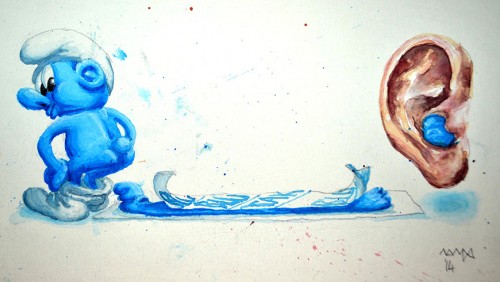 From the pages of Surfing World magazine

Apparatus is what separates us from the Gods of pro surfing. Those goofy reef shoes, nose guards… and earplugs. The pros embody a moment in time, you see. The rest of us actually live a lifetime, and accordingly things wear out. If you surf in a cold place, ears are one of the things that are going to go.

Exostosis is a bony growth in the external ear canal (known medically as the far canal). The condition is also known as surfer’s ear, caused by cold water, wind exposure and picking your ear wax with unfolded paper clips. Okay, I made that bit up. The growths aren’t harmful in themselves – it’s the body’s way of protecting some very sensitive equipment, including the ear drums and facial nerves, from the elements. Trouble is, they trap seawater which then warms up to body temperature and harbours all sorts of horrendous bugs (most of which have yoghurty names like aspergillus), leading to seriously harmful infections. You know you’re in strife when you get that glug sound driving home from the water, and all you can hear for days is the sound of your own digestion. (And isn’t ‘discharge’ an unpleasant word…)

Flying is not an issue with exostosis, unless the Eustacian tubes have gone feral (see yoghurt, above). It’s just that when the plane lands, surfing becomes a misery. The condition is usually bilateral, although it is possible to develop an “onshore ear”. For Victorians, looking south as they sit in the line-up, it’s the right ear that cops the westerly exposure. As things warm up going north, there’s a theory that pterygia of the eyes outnumbers exostosis of the ears at about Byron, as sun glare takes over from wind blasts.

Although the bony growths will not go away on their own accord, there are options. Starting with prevention.

Here’s Rule Number One: surf wax is not an option. If you lose a glob of Palmers in there, some surgeon is going to have to dig a mineshaft to find it. Blu tak is nearing acceptable, though it renders the wearer mostly deaf. Your choice: some on-water discussions are worthwhile, some aren’t. Bear in mind its propensity to pick up ear hairs and wax: if you leave your stash on the dash, expect hitch-hikers to dive out the window in fright.

You can get custom earplugs made with a little aperture so you retain high frequency hearing. Or there’s the ol’ Doc’s Pro Plugs, inextricably linked with the remarkable Doc Pascowitz, but likely invented by another Doc – Californian Doc Scott. Among their happy wearers is SW’s Doug Lees, who keeps multiple pairs in his car, office, bathroom, luggage and underground lair.

Doug the Plug takes us to the dark end of the spectrum – surgical intervention. The common technique is an incision behind the ear followed by drilling. Expect eight weeks out of the water, and up to 15 stitches, depending on the size, location and history of the blockages. The ears are done one at a time so you aren’t completely deaf while you heal. But Doug once heard a rumour that surf pap Aaron Chang was having his ears chiselled out every five years by a surgeon in San Clemente, who does it without incision, using dentistry tools. Delicate, precise, and back in the water within a week. Worth a try, shrugged Doug. The results have been stunning – he’s never the guy saying “Huh?” in a social situation. – Jock Serong