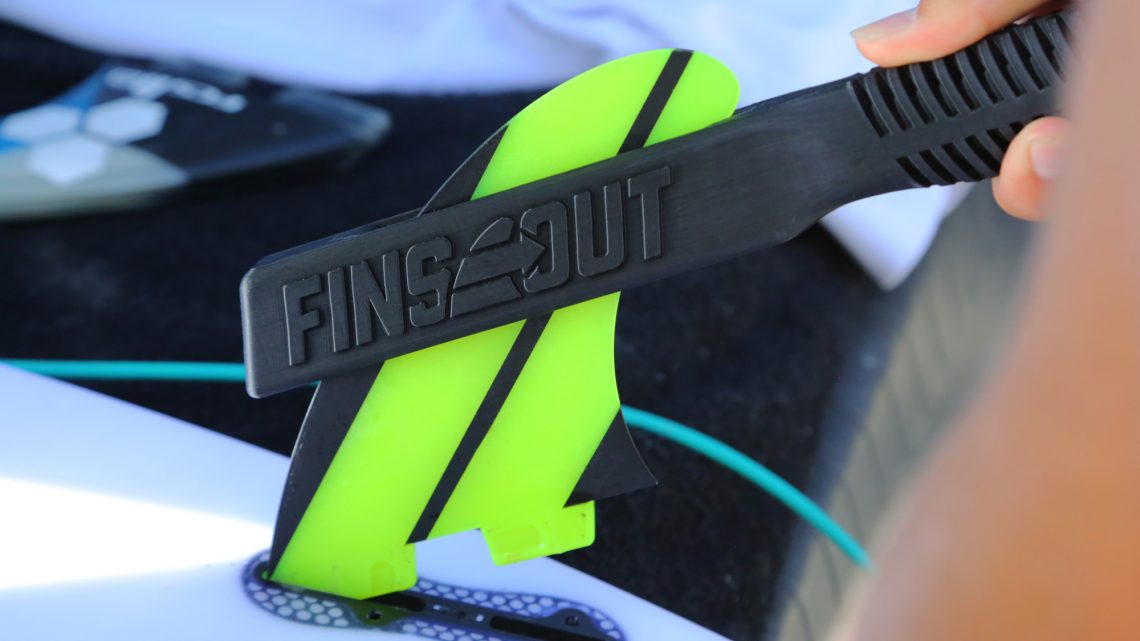 Swapping the fins out of your surfboard just got a whole lot easier. Surf industry veteran Kris O’Brien is just about to launch a handy tool compatible with the revolutionary FCS 2 system that lets you click your fins out with a simple flick of the wrist. Named FINSOUT, it will save parents from needing to swap fins for their grommets, protect cold hands from aches in winter and generally get people out of the car park and into the surf sooner.

According to Kris, who has worked for decades with global brands like Quiksilver, the idea for the tool started to form during surf trips overseas, where taking fins in and out of boards is serious chore.

“The first time I realised there had to be a better way was during a boat trip in the Mentawais,” explains Kris. “The surf was pumping and I was on the top deck of the boat and went to pull the middle fin out to swap it over. With the force I needed to use, the fin flew out of my hand and went off the edge of the boat. I had to dive over to save the thing. It was a full comedy act. The next trip I did, there were like ten of us trying to pack our board covers at the end of the trip and everyone was passing a thong around to bash their fins out. I figured there had to be an easier option.”

The solution came to Kris during a brain flash at 3am one morning about 6 months later, that saw him jump out of bed and scrawl down some drawings on how to make it happen.

“The next day I made a physical sample and was so excited” he continues. “From there it took about five or six different prototypes before I got the curves and hand grip just right, but in the end I cracked it. It’s now a fully registered design with a patent pending. Production is just about to ship out to stores”.

The tool will now replace a range of patch solutions surfers have come up with over the years to help change their fins, from using towels, legropes or even garden gloves so they don’t hurt their hands.

Available globally in June, FINSOUT can be found online and from all core surf retailers.

For more information head to https://finsout.surf

Next post Thong Blowouts, it can be a real buzzkill, right?!

Previous post 10 Ways to Increase Conversions in Your Retail Store