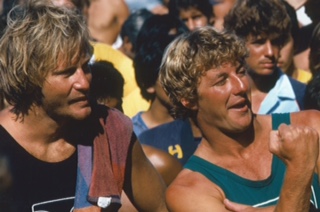 Pipe final, Billabong GM and Volcom CEO. These are only a few notches in Dougall Walker’s belt. A popular figure in the Australia surf industry, we wanted to hear his thoughts on the industry at the moment, the pipe final and how he got to where he is now.

Many don’t know, but in 1980, the year that MR became World Champion you competed in the Pipe Final alongside the likes of MR and Simon Anderson. That seemed like golden era of surfing of some sorts, could you tell us about those times as a surfer?

To be honest I think every era in surfing is golden as mine was for me. That particular era in the late 70’s and early 80”s was a time of transition and professional surfing was trying to find out exactly fitted in the world. As a teen in the 70’s I had a fair amateur career but only a handful of surfers could actually make a full time living as a pro without income from another job. Even MR and Simon had their surfboard businesses and spent a lot of time in shaping bays all over the world. In 1980 after the Oz leg I spent most of the year working a day and night job to stay alive and save enough money for 6 weeks in Hawaii. That year I was pretty successful making the finals of the Pro Class Trials at solid sunset and getting 3rd at Pipe where the early rounds were massive. I spent a night in hospital with concussion after getting smashed by a horrendous wipeout at the end of quarterfinal. Even with a pretty successful Hawaiian season I came back broke and reluctantly conclude it was time to hang up the jersey and get a real job.

You transitioned from being a competitive surfer to a role as the GM of Billabong Australasia for 18 years. How did that transition from professional surfing to running one of the biggest global surf brands come about?

In 1982 John ”the Butcher” Howitt the co owner of Peak Wetsuits on Sydney’s Northern Beaches took me on as a sales rep and general dogs body. I’d been sponsored by Billabong since the 77 Pro junior and I also acted as the NSW team manager for Gordon Merchant, scouting for talent. Peak and Billabong, even though completely separate companies had many crossover surf team members, including Occy. We even did a couple combined ads in the Surf mags. In 1984 I moved to USA to set up Peak there, and when I returned to Oz in 1986 Gordon rang me & asked me move to Qld & takeover from him managing sales. At the time to company was turning over around $6m from around 600 accounts. From there, as Gordon gradually spent more time at his homes in Angourie, JBay and Hawaii, and I took on more responsibilities in Marketing, product development , International & Licensing. In 2000 after the company floated I was official appointed as GM of Australasia. In Sept 2004 I “retired” so I could spend more time with my young family, surf more & lower my golf handicap. At the time the Bong was extremely profitable, Global revenues where around $500m and Oz $240m, with still only through 650 accounts. It was a wild but fabulous ride.

After Billabong you co-founded and directed Firewire in Australia, but you also took some time away from the industry before taking on the role as CEO of Volcom Australia is that right?

Yes. I needed to step right away otherwise, as a confirmed workaholic, I knew I would get sucked straight back in. I even stopped reading surf mags because I when I looked at the ads it pulled me back into my old world. My involvement with Firewire was then and is still now different. I’m still a real grom at heart so being involved with surfboard building is more of a passion than business.

What had changed in that time you were away?

Wow, where do you want to start. When I left in Sept 2004 the industry was on fire. The big brands, particularly Billabong, and the majority of their retail customers were getting double digit revenue growth, and even bigger profit growth. By the time I returned in March 2011, almost everyone had been in decline for a few years and the slide down seemed to have no bottom. Most people where blaming the GFC and ‘Surf” not being cool any more. My thoughts are that the main companies who previously dragged the industry forward just stopped evolving.

When Greenie and Lawro at Quik, as well as Gordon at Billabong started their businesses there was no such thing as a surf industry. There were hardly any surf shops, the product range consisted of a couple of styles of boardies that were made in a small local factory, or as in Gordon’s case at his home. For these backyard enterprises to develop into billion-dollar worldwide brands the business needed to be continually changing to make this massive progress.

The “apprentices” to the founders, my industry peers and myself, where schooled in the need to continue to evolve the business and hence they continued to grow & expand.

By the mid 2000’s the founders & many of the second-generation managers were either retired or greatly removed from the day-to-day running of the businesses. The next generation or managers inherited extremely successful companies with well-developed systems that they religiously followed in an attempt to maintain the substantial growth and profitability created by their predecessors. Unfortunately, in the case of Quiksilver & Billabong they were now public listed companies and under enormous pressure to continue to grow. Rather than look at how they should evolve, they stayed with, or even went back to what had worked in the past. This started a long downward spiral.

Why did you choose to take on the role at Volcom?

In late 2010 I was contacted by a New York head-hunting firm who offered me the job of running Volcom in Oz/NZ. Initial I turned them down because I was pretty happy with my lifestyle but when they approached me again in early 2011 my wife told me it was time to go back to work. I reluctantly agreed to attend an interview in Sydney & after about 3 hours of discussing the business & changes that needed to be made my juices were flowing again and I agreed to join the company.

You recently sent an email out to key retailers talking about seasonal buying. Can you elaborate a bit on the email, and what messages you were trying to convey

To be brutally honest the only way to put it is that ALL of us in the industry – me, Volcom, the other brands and the majority of retails are DICKHEADS. Every season we Indent stock that is totally out of sync with the weather or customer buying patterns. The retailer then sits on the majority of this stock for 3 or 4 moths before most of their customers are ready to buy & by this time the stock is “aged” & quite often on sale. This stupid system creates excess inventory, bad cash flow & low margins but year after year we continue to ship truckloads of fleece in the hottest months of the year & even more boardshorts in the coldest months of the year. The letter I sent out to retailers had irrefutable data to back this fact and I wanted them to know in advance that Volcom was drawing a line in the sand and would be changing our product offerings, and delivery months accordingly.

Amazon is set to open in Australia over the next year. What impact do you think they will have on the brands /company retail and independent retailers?

I, like many have my concerns on Amazon’s entry into our market. In the USA there pricing on a product is determined by the lowest advertised price for that product anywhere on the internet. If that is the way they intend to operate in Oz then I cant see that being a good thing for anyone.

What do you see the major challenges the industry has to face in the current environment?

Although it may seem like an obvious answer I still don’t think there is enough emphasis on continuing to reinvent ourselves to be relevant to the new generations as they reach their consumer years. I have a 19-year-old son and a 15-year-old daughter. Themselves and their friends definitely look at the world through different eyes to any of the generations before them. If we don’t communicate with them they way they communicate with each other, and understand the things that they see as important then they will ignore us and the products we offer.

On the flip side, where do you see the opportunities for surf over the next few years?

The great advantage that surf has, and has always had is that unlike general fashion we are tied to something that is real and wonderful to generation after generation – SURFING. It’s up to us to us to get our shit together and take advantage of the head start we have. Without sounding like a broken record, just getting something as simple as giving the customer the new product they want at the time they want to buy it would be a simple and very good start.

Next post How to Hire and Keep Quality Retail Staff