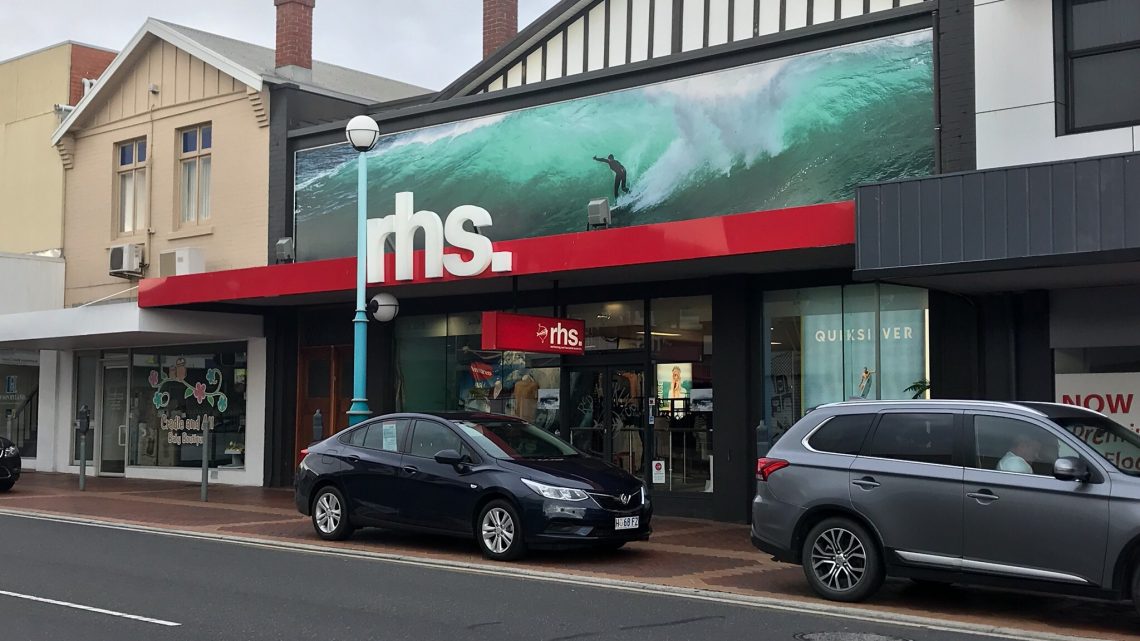 The deal; which settled only last week, includes all four Red Herring stores which are located in Hobart, Launceston, Burnie & Northgate, Tasmania. Red Herring will join Saltwater Wine and Stormriders under the Wilson Retail banner

Victor and Macka have been friends for a long time and were both founders of the SBIA. With the dust still settling, we spoke to Macka about the deal, how it came about and some of the finer detail. 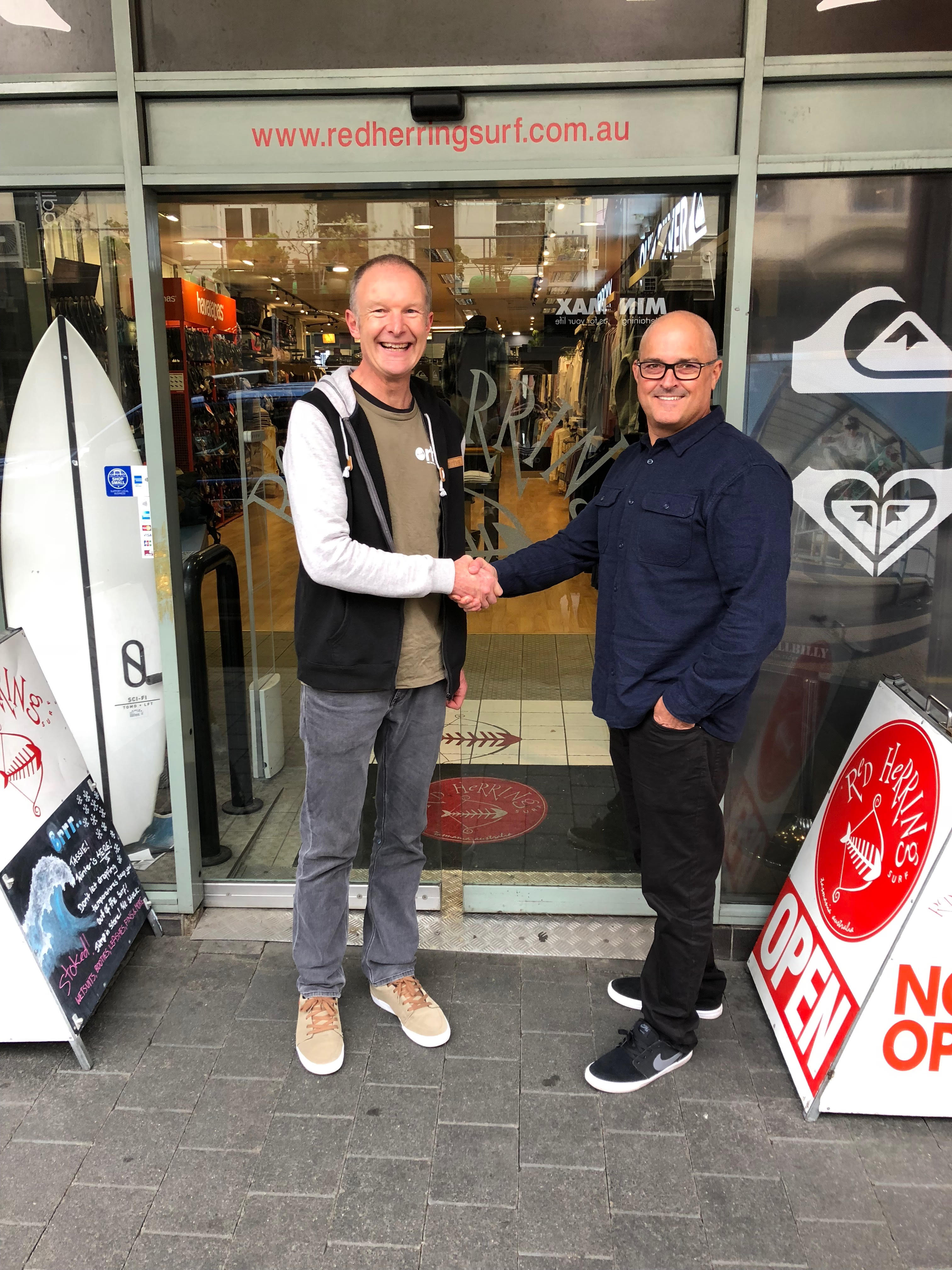 Lyndall Browning: How’s it going? You were in Tasmania all last week?

Anthony Wilson: Yeah good thanks, it’s been a big couple of weeks.

It’s a bit of a blur to be honest! Stocktakes done and dusted, we installed new computers across the stores, installed our managed music platform, cut over to our point of sale system and as we speak Porky and Mick are training the team on our systems and processes.

LB: Your existing stores are all based in regional NSW. What made you look as far away as Tasmania?

AW:  When Victor and I first spoke I was actually perched up in hospital after getting a knee replacement and half off my chops on pain relief. More stores was the furthest thing on my mind at the time.

It was a funny conversation, Victor was like “Hey Macka, I’m thinking about selling the shops at some stage, Paul Burdekin said I should give you a call but I’m not sure why?”

I had told PB that I had looked at a couple of other locations but hadn’t gotten too far, so when Victor called him to see if Billabong had any interest in buying Red Herring he obviously thought I may have some interest – even if I didn’t know it!

LB: The obvious observation is, it’s a long way away from your other shops, how will you make that work?

AW: Yeah for sure, it’s a long way geographically but we are used to operating stores remotely or from a distance. The reality is we can be in Tasmania in less time that it takes to get from Port Macquarie to say Bathurst or Dubbo. The distance isn’t the issue.

Retail is detail, operationally we have to have the right support structure for the stores and we have to make sure the Tassie team have a clear understanding of what we need to deliver to our customers.

Then it’s all about execution, the right products and brands in the right stores at the right time and pull that through to our marketing and VM. Then we need to make sure that we communicate all of that to the stores really clearly.

LB: What, if any, changes have you had to make to your existing business or head office?

AW: One of the really exciting things is that Red Herring will allow us to have a better management structure. We’ve been jammed a little over the past year or two. We’ve added stores but not really changed our structure too much, as talented and hard working as our team is, we have definitely been stretched at times.

With Red Herring coming on board our Head Buyer, Emma O’Brien, has stepped up to a new role that oversees Marketing, VM and our Buying department. With Em’s move Mat Cox moves into the Senior Buyer role and is joined by Aimee Steel as Ladies Buyer. Aimee managed our new Stormriders store in Tamworth and has made the big move to the coast.

Our Ops Manager, Paul Worboys better known as Porky, was super stretched looking after 13 stores. To help shoulder his load and to better support the stores we created Cluster Manager positions. In NSW we have two of our most experienced store managers, Mick Mitchell and Ross Dreise, stepping into the roles and after a rigorous interview process our newly appointed Hobart Store Manager, Kristy Murtagh, will be looking after the Tassie stores.

LB: Wow, big changes. Was it difficult to get your Head Office team on board?

AW: I think everyone has felt the pressure over the last 12 or so months. Once we talked through how it could work, the new structure and how Red Herring would help us be better retailers everyone was on board.

LB: There would have been a lot for your team to do?

AW: I take my hat of to them. We have an amazing bunch of people and to see the commitment and the way they have knuckled down to get through the past 4 months has been very humbling.

Our buying team have written summer orders for Red Herring essentially doubling their workload for the biggest buy of the year. All of the Red Herring product information and barcodes had to be tidied up and imported into our POS system, the number of hours Emma spent on excel spreadsheets was huge. All of the stores had to be set up on our roster and payroll platform and then onboarded. Signing over leases, service providers, setting up new accounts, working out new approaches. It’s been full on!

Victor and his crew have also been unreal with the transition, they have all been super helpful to our team.

LB: Why did you buy Red Herring as opposed to just open a few more stores closer to home?

AW:  Since 2010 we have opened seven stores and relocated or refurbed another two. That takes a lot of energy and resources and some of those stores are lower turnover so they don’t contribute a lot to the HO wages pool.

On that front we were jammed a little, we needed to grow to add to our head office structure but needed turnover to support it. The more we tossed around Red Herring the more it made sense. The opportunity to add a known contribution to head office made it a lot easier to plan.

AW: It is. Business wise it’s one of the ballsiest things I’ve done. It definitely ranks up there when I begged, borrowed and sold everything as a 22 year old to go into partnership in the first store, and then again 15 years later to buy my then business partner out.

LB: Was there any pushback from the Red Herring staff?

AW: Nar, I wouldn’t say pushback, I think there was definitely a bit of fear of the unknown. Victor has created a great team and culture, I’ve seen first hand the respect he has. For a lot of the crew Victor and Red Herring has been a big part of their lives and not knowing us caused some nervousness. I think for some there was also some awkwardness as Victor’s warehouse and head office were closing and with those crew looking for jobs.

LB: You mentioned onboarding, how did you approach that?

AW: While we’re both family-owned businesses with lots of similarities, there are also quite a few differences. We wanted to make sure we really explained our approach to managing stores and how we operate.

As soon as the announcement was made in February, Emma, Porky and I did a whirlwind tour of Tassie to introduce ourselves and run through what we do and how we do it and answer any questions.

Next we opened applications for the Cluster Manager, Store Managers and 2IC’s. Porky and I then went back down in March for interviews then finally in May we did another trip to appoint the management team.

It was a drawn out process but we really wanted to make sure everyone was on the same page and understood what we’re about.

LB: Everyone was onboard?

They are a great bunch of people, 3 days in and I’d already had an email from a customer giving Brendon at Launceston a huge wrap for his customer service!

LB: Will you keep the name, Red Herring?

AW: Most definitely. The history and legacy of Red Herring, and before that Sea World, is not something you would walk away from. The history is amazing, the founder, Bill Thwaites was a champion surfer in the 60’s and represented Tasmania in the Australian Surfing titles in 1965. The idea of surfing in Tassie in the 60’s is rad. For me, there’s 47 years of history to celebrate, not walk away from!

LB: Obviously you’ve been to Tasmania a few times now. What excites you about the opportunity?

AW: Tassie is an amazing part of the world, it’s beautiful, it’s wild, great food, great people. Ness and I and the kids are heading back down on Sunday, it’s exciting to introduce them to the team and see what I’ve been raving about!

The opportunity is also for us to become better retailers. The retail environment is changing really quickly and we’ve got to be at the top of our game, Red Herring is going to let us have the structure we need and that’s exciting!

LB: Last question, have you surfed in Tassie yet?

The short answer is no! We have left boards at the Hobart store for when the opportunity comes up but that hasn’t happened yet. Porky, Mick and I did go for a swim at Burnie last Sunday just to get wet, it was pretty bloody cold!

Next post WHAT EXACTLY IS THE RETAIL STORE OF THE FUTURE?

Previous post Rusty have partnered with 'On Point Collective' Agency