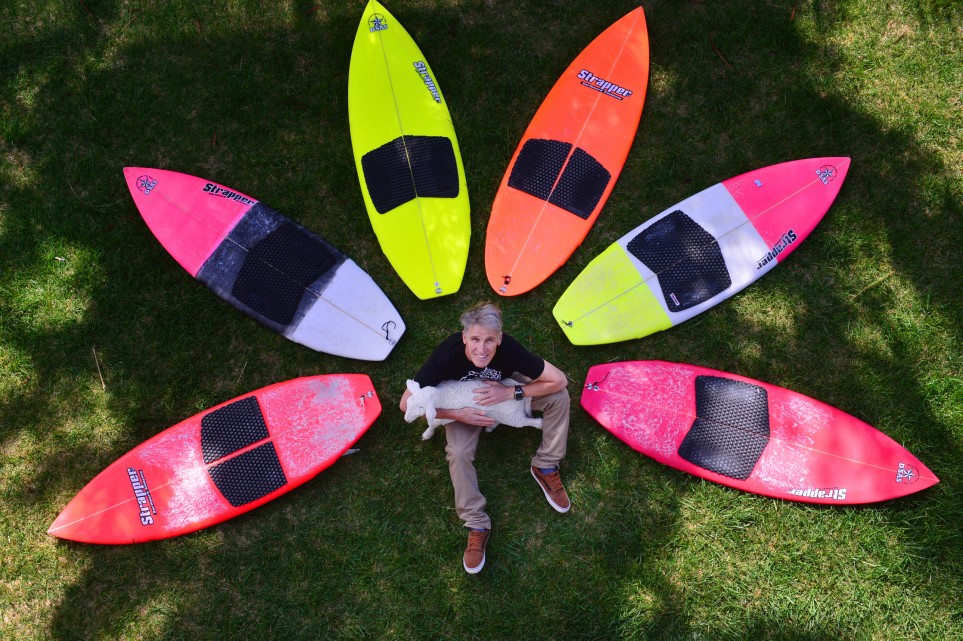 Mike Di Sciascio has been on the SBIA board since its inception in 2011, bringing an always-pragmatic view to the board’s discussions, ideas formed from his vast experience in surfing and retail.  As a surfboard shaper and surfer, Mike appreciates the core values of surfing and his business Strapper Surf and Blunt Skateboarding Co, won the Shop Fit Out of the Year and Victoria Retailer of the Year at this year’s Surf Industry Awards.

Maintaining a business at that level requires a lot of commitment and Mike is stepping down from the board at this month’s AGM in Sydney. We thought it was a good time to corner Mike and get his thoughts on the surf industry and its future.

Mike, you’ve been involved with the SBIA for a long time and have had a big input  into it’s direction and development. Why are you stepping down at this  year’s AGM?

It’s been a lot of work and personal energy as well as time that’s  been taken away from my own business, my kids and my surf time and I just  want to put more focus on to those areas. I have been involved in surf industry  group boards/committees and/or boardriders committees for nearly 20 years. I still want to be involved and be a contributor but will pull it back  a notch, for now anyway!

You are also involved in the Independent Surf Retailers association (ISRA), will  that continue?

Yes I was a board member previously of ISRA, am a current member and  plan to continue. It was from ISRA that the SRF/SBIA idea germinated. I  think ISRA has been amazing for all of us involved and there is a strong  energy within the group. I know that I have learnt and got a lot from ISRA  that has made my business better and I think all the members would be the  same, as well we have a good time!

The SBIA evolved from the SRF, has the inclusion of the brands been  positive and what changes have you seen over that time?

A group of us formed SRF (Surf Retailers Federation) and we morphed it  into SBIA (Surf and Boardsports Industry Association). I’m really stoked on  what we have achieved particularly the awards which have focused and  highlighted the special, unique and great performances in our Industry and  importantly helped define and separate us from non-boardsports categories.  Along with the open and inclusive communication and education I would like  to think that a lot in our Industry are better off than we were before  the SBIA.  I think including the brands with retailers and being a broader  industry group has been a good thing. SRF enjoyed great support from all the  brands so it was a logical step to involve them and be a total industry  group so SBIA was evolved. We both need each other and have mutual benefits  that we can try to achieve.

One area of change in the past decade is the brands, your suppliers, becoming retailers  themselves. Do you see that as a good thing for the surf retail industry?

That may be true generally but in my trade zone, Torquay, there has always  been company/brand stores so it’s all I know and it’s not new. It’s been a  good thing as the brands have invested in and elevated many aspects of surf  retail but I am adamant that the best surf stores in Australia are run by  Independents. The Brands want to showcase their brand values and products  which I understand and I guess that a balance will develop of brand stores  and Independents essentially driven by market/consumer demand. There’s  potential that some brands may over cook it and cannibalize the Industry,  motivated by protecting or taking rack space and the pathway to market. In  the shorter term it may give them more, but I think that it will cost them  and damage their brand and real value in the longer term. The consumer will ultimately decide.

There’s always a lot of talk about the impact of online retail outlets and  there has been some aggressive chat from some online businesses about the death of bricks and mortar retailers. Do you give much  credence to that and what do you think the advantages are for the bricks and  mortar retailer?

Online is here to stay but so are B & M stores. In Australia online has  had a big impact, but a lot of that was driven by the strength of the AU$ and  the competitive advantage that our “dumbo” government (both sides) gave OS  online with no GST on purchases under $1000 and also no duty which is  generally 5% on landed goods in our industry which adds to even more at RRP.  It all has happened when the economy and surf was doing it tough with the GFC  as well as the surf industry having its own issues. All that discount online  sellers have done so far is convert profitable sales to no profit or loss  making sales and poorly represent the surfing lifestyle, which is a lot of  what we are actually selling. I don’t think they have done anything for the  Industry, I haven’t seen anyone actually develop any new business or  contribute anything new, the model is to just take someone else’s business. The Brands did a poor job for a while of managing their distribution online and how their brands  are showcased, which has and is improving. The AU$ has dropped and the  Government is bringing in GST on all purchases, Bricks and Mortar are doing  a much better job and Online is looking better too… so I think both  online and B&M are here to stay. Who does more or what will depend on how  good a job they do and ultimately what the consumer wants. I think the best  online “surf” business hasn’t likely evolved yet, but I’m sure it will down the  track.

“All that discount online  sellers have done so far is convert profitable sales to no profit or loss-making sales and poorly represent the surfing lifestyle.”

The surf and boardsports industry has its ups and downs, things  slowed down with the GFC, back in 2008. Do you think things have improved for the industry over the past couple of years and how do you see the  outlook moving ahead?

There has been a lot of retail consolidation and I suspect some more  will happen but things have generally improved as it’s stopped getting worse  and there are some green shoots around for sure. Some companies have made  great decisions and are quite solid as have some retailers, but overall it’s  still a flat environment on a lot of levels including the overall economy.  I’m positive going forward but with such a high level of competition only  the best will get the rewards.

What about your own business? How do you see the future and what plans do you have?

The last five years has been the toughest of my working life and I’m  super stoked with my team and loyal customers who have helped us survive.  As I said we are positive about the future and we have a plan. I have  invested a lot into reinvigorating the Strapper Surf business and shifted  from a defence position to offence. We have focused on our core business,  staff, our customer experience and going surfing. There’s no easy future, but  if we do our job well I’m sure we will get our share.

Next post FOOTWEAR – Get the Basics Right to Drive Sales