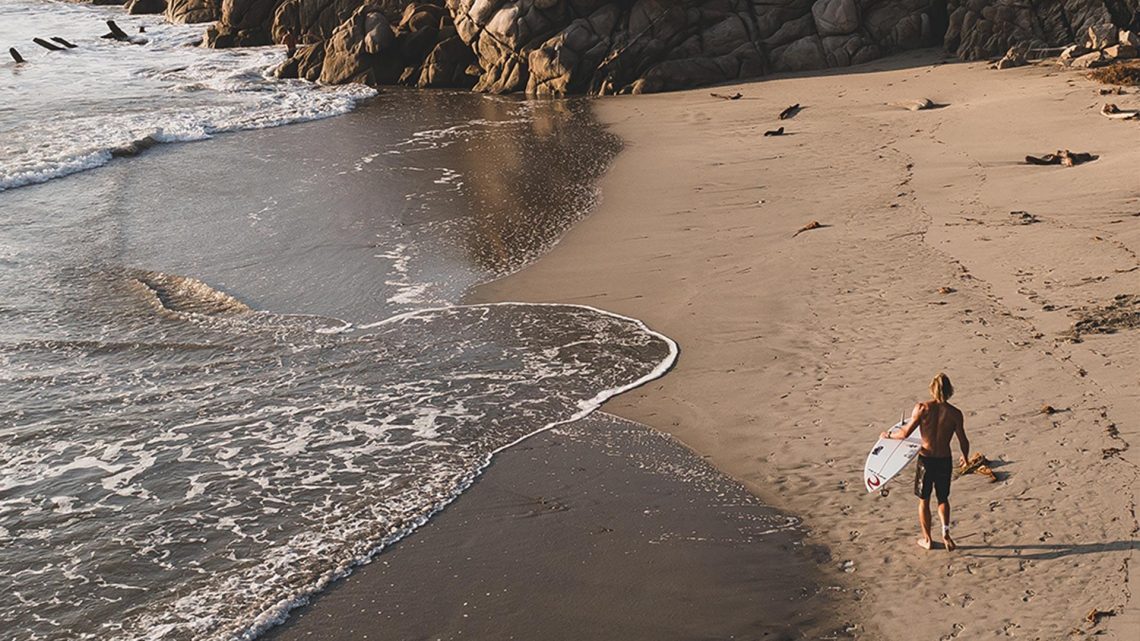 On the whim of quick Surfline check, the Rip Curl team heads south to Oaxaca, Mexico on the Search for perfect waves before the upcoming WSL Championship Tour event.

When you land in Huatulco, Oaxaca, Mexico, you quickly begin to understand that the journey you’re embarking on will be anything other than ordinary. As you descend through the clouds you’re greeted by expansive views of lush jungle, with wide, brown rivers flowing out into a bright blue ocean. You crane your neck and strain your eyes to try and decipher what the ocean is doing far beneath you and your tiny window. When you land, you see that the airport is made up of a few small buildings with thatched roofing, and the humidity and heat smacks you in the face as you step off the plane and onto the steaming tarmac. The few locals you see working at the airport smile widely. You’ve arrived.

This is the last leg of travel for those surfers who are lucky enough to find themselves on route to the middle of Oaxaca, a coastline that offers up perfect waves at the end of long dirt roads. Oaxaca was first recognised on the world stage in 2006, when Rip Curl brought The Search event to Mexico. The surf was firing – wave after wave reeled off the point and conditions were perfect. Ever since, the world’s best have dreamt of having the opportunity to surf this wave on Tour again. As it turns out 2021 is their chance, when the WSL rolls into Huatulco for the Corona Open Mexico this August.

So, when Owen Wright and Morgan Cibillic finished competing at the WSL Surf Ranch Pro in June, rather than heading home they decided to plan a trip south and put in some pre-game time in Mexico. A few quick checks of the Surfline forecast sealed the deal, and the team was on a plane less than a week later.

“It was a really last-minute call,” says Kekoa “Bam” Bacalso, Rip Curl Team Manager and former Tour surfer. “We were all sitting in Leemore after the Surf Ranch and were messing around looking at swells. We saw that this area in Mexico said 6-8 feet and good conditions, so we just went for it and pulled the trigger.”

With a bit of risk comes great reward, and the crew scored. “It was perfect five foot,” says Bam.

“We drove over the hill at the end of the road and literally saw the waves that you draw in your composition book as a kid. There was not a drop out of place, it was perfect.”

Morgan and trip grom Luke Swanson had never been to this part of the world before. Owen had been once, but he had never seen conditions like this. Bam, however, was lucky enough to surf this spot on Tour in 2006. When asked about his experience there he recalls… “I got 17th, I surfed the heat of my life against Slater and was combo’d, but I got the two sickest waves and came in smiling. It was the best heat I ever lost.”

The trip was a week long, and was focused around learning the wave and dialling in equipment for the upcoming Championship Tour event. Owen and Morgan both brought 6-8 different boards and were trialling 4-5 sets of fins per board. It was hour after hour, surf and surf, day after day of figuring out what worked and what didn’t. The wave they were surfing is a picture perfect right-hand, sand bottom point break… but it’s not an easy wave. She’s tricky, and equipment plays a big role in surfing well here.

“Everyone was absolutely ripping,” continues Bam. “Owen was surfing exceptionally, he’s tailor made for this wave and his backhand is one of the best out there.”

But the entire team put their time in, really learnt the lineup and came out of this trip with a lot of confidence. They’ve seen the potential the ocean has to offer here, and they know what she’s capable of. When she turns on, they’ll find their feet quickly.”

The wave itself has been through a lot over the past decade. After the event in 2006, the community took it upon themselves to try and create more space on the beach to allow for tourism. They diverted a river mouth away from the main carpark area, which opened things up to allow for a small (very popular) restaurant, a board rental area and a bit of shaded sand underneath the palm trees. When this happened, the diversion of the river mouth changed the wave and the perfect point break disappeared. The beach was much more inviting, but the sand that created the surfer’s dream was gone.

Over time the wave slowly rebuilt itself to what we see today, what you see in this clip. The sand is back, and it’s better than it has been in years. The local community is thriving, and the small amount of tourism that this area sees seems generally healthy. If all goes well, the WSL Championship Tour event this year will add long-term economic benefit to the community and to the wave.

“The team is so excited to surf this break in competition, and it was awesome to see them have the opportunity to surf with the locals for a week before the Tour comes down. This community is all about giving respect and getting respect,” says Bam.

“For us, this trip was a big success. It was a work trip – we were here as a pre-game to the CT. But it felt like a true Search trip. We pulled the trigger on a whim and we absolutely scored. It’s a pretty damn good feeling when everything works out.”

Next post Creatures of Leisure partners with Surfers Not Street Children