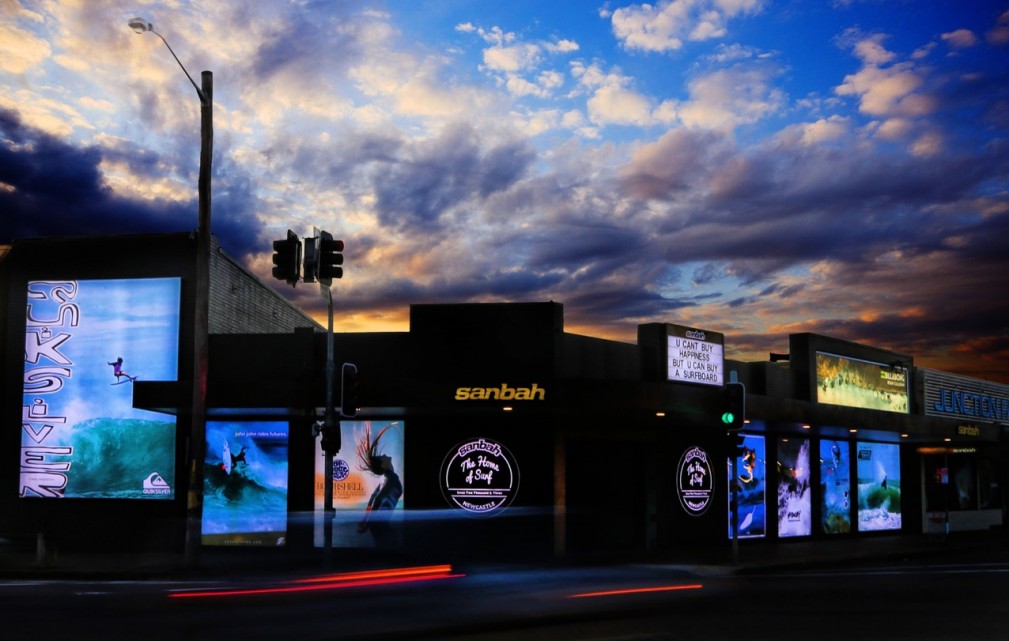 When Rhys Smith and his wife Sophie bought the Sanbah surf shop in the Newcastle beachside suburb of Merewether in 2007, it was ostensibly a surf fashion store of 100 square metres.

Sanbah is now one of the biggest core surf stores in the country and was also runner up NSW Breakthrough Retailer at last year’s Surf Industry Awards.

Reggae Elliss caught up with Rhys at the height of a busy summer and things were ticking over nicely.

When you bought Sanbah in 2007 you knew nothing about retail. Coming out of competitive surfing and a few years on the WQS, and then running the surf school – what was it like when you first opened?

It was the scariest time ever. I’d just turned 25 – I didn’t even know how to use an EFTpos machine.  I think we did 25 bucks on the first day, and that was my dad buying some wax. I just thought, “What have I done. This is the dumbest thing we’ve ever done.” Sophie and I just worked seven days a week, just the two of us, I remember being here to 2am, putting up Havaianas. Then we got to christmas and made some money and then it kind of just kept kicking on.

You moved pretty quickly towards an emphasis on hardware – surfboards, wetsuits and accessories – you obviously saw an opening in the local market.

For us it has always been an evolution of having more and more boards. That’s what we do well… I love selling boards. When we first started, Newcastle was known for its local shapers ­– MR, McCabe, Pacific Dreams, Sam Egan – and if you wanted another board people were driving to the Central Coast or Sydney to get them. The vibe I got was that no one would open up a store stocking multi brands of surfboards, so I thought, why not? So I started getting some Al Merricks and Haydens and pretty soon we realised local surfers wanted them.

Surfboards are an investment, both in capital and space.

“For us it has always been an evolution of having more and more boards. That’s what we do well… I love selling boards.”

It sounds like you’ve been doing something major in the store every 18 months.

We’ve separated the stock and the clothing sits as its own store in a way. It’s 105 to 110 square metres and you walk through that section into the board store. The clothing is accessed from the shopping centre – it drags in the families; mums and kids. Then all your crew that surf come in from the street.

It was clothing one side and then wetsuits and boards on the other. Then it just got too small and in June last we knocked in to the old bank next door, taking over that, so now we have the whole corner.

That’s a lot of space.

We’ve got the original bank vault is now our second hand board store – it called The Vault. We kept a few quirky features from the bank.
It is working so much better for us, now that we have more room. 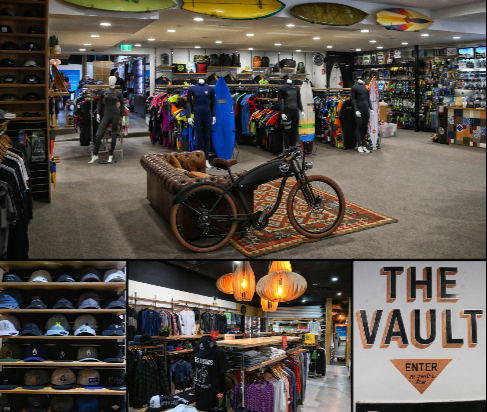 What percentage of sales is apparel?

Probably only 15-20%. Our clothing is the sideline for us – we’ve always carried fashion and have a good following with female customers. Before we bought Sanbah it was targeted at the female customer and didn’t really have any hardware, maybe 10 boards. It was really strong in surf fashion and ahead of the game with the brands and styles they stocked. So we’ve continued that and it keeps it a bit more accessible for everyone, rather than just being a core board store.

How are summer surfboards sales going?

Really good. We’re really happy with the board turnover. We have a big choice and the brands we stock have such good models. We’ve been selling a lot of Lee Stacey’s boards. DHD, Channel Islands, JS, Firewires, Chilli – they all sell really well for us

How many boards on the floor?

The last count – including second-hand boards, softboards and surfboards – over 1000.

Whoah. That’s a heavy investment. Obviously a lot of high performance boards in the range, do you carry a full range for beginners through to old blokes as well?

Because I owned the surf school – which I just sold to my brother – we’ve always had a huge beginner market. A big range of mini mals, softboards, the finless range.

You bought the shop just as the GFC hit – how’d that pan out.

Yeah, I never experienced the “good old days” and it’s been a lot of hard work, but we’ve done all right.  I believe that the only way to keep increasing sales and to grow your business is to change.  We’ve got really good staff and we all work together and try and change the store to what is working right now, rather than stick to what a surf shops have always stuck to.

Change – is that more a VM thing and when you do a refit?

For us it has always been an evolution of having more and more boards. That’s what we do well… I love selling boards.

Well, speaking of staff, what is the secret to finding good staff and keeping them?

My biggest investment is staff – that’s what I focus on and most of my staff have been here for a long time. For a lot of them their first job was with Sanbah and they are still here.

First one is making sure they enjoy working in the store and looking after them. A lot of the board makers will offer free boards or discounted boards, so I make sure I pass that on. Even things like a few parties, Friday arvo beers, going surfing – just trying to make it really fun and making sure it is not too serious.

That way they want to stay.

The current store seems to be going well and given the renos you’ve done over the years, it looks like you’re not scared of having a go. Ever thought of opening another store?

I think about it, but I also think I want to go surfing as well.  I’m 33 and there’s plenty of business left in me. I’m just trying to enjoy it at the moment and make sure this store is working really well. That’s my focus. Once this is doing its thing and runs really smoothly I might think about it, but for the time being, nope.

Previous post Get people back in store in the quiet times