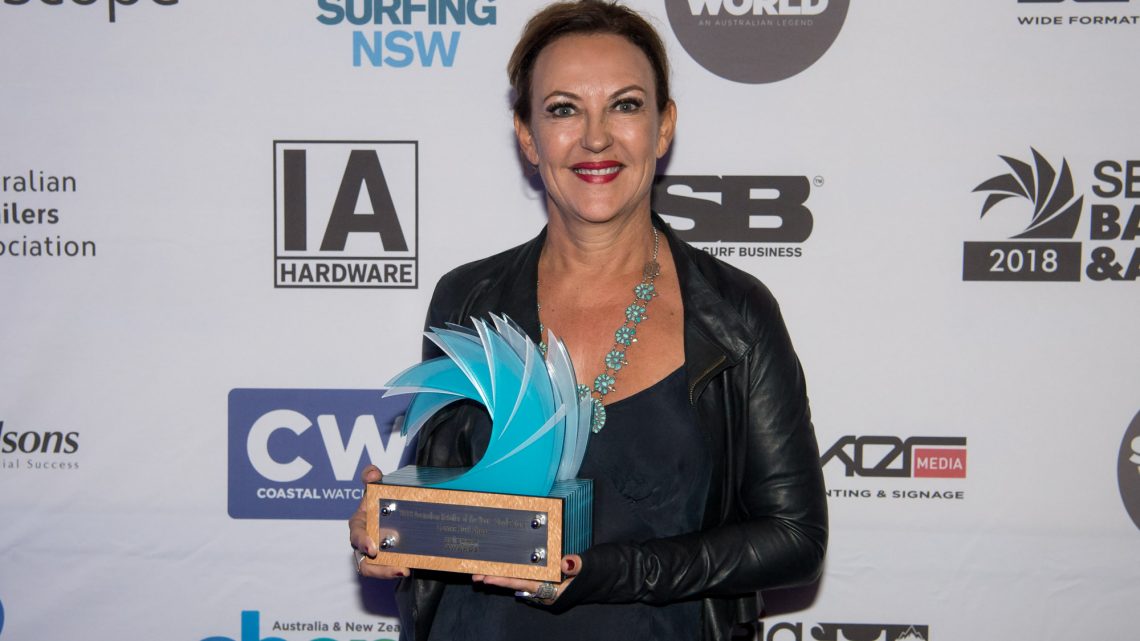 Awarded the 2018 Australian Single Store Retailer of the Year, Corner Surf Shop epitomises local business that is built and run on passion.

Corner Surf Shop was established in Geraldton, Western Australia in 1976 and like many Australian businesses, their concept came about over a beer and stemmed from a love of surfing.   Not only did this story come about with a beer and a handshake, it included the love story of Sam and Suzi Salmond. Complimented in life and business, Sam and Suzi both bought their own levels of expertise to the business which made it what it is today. 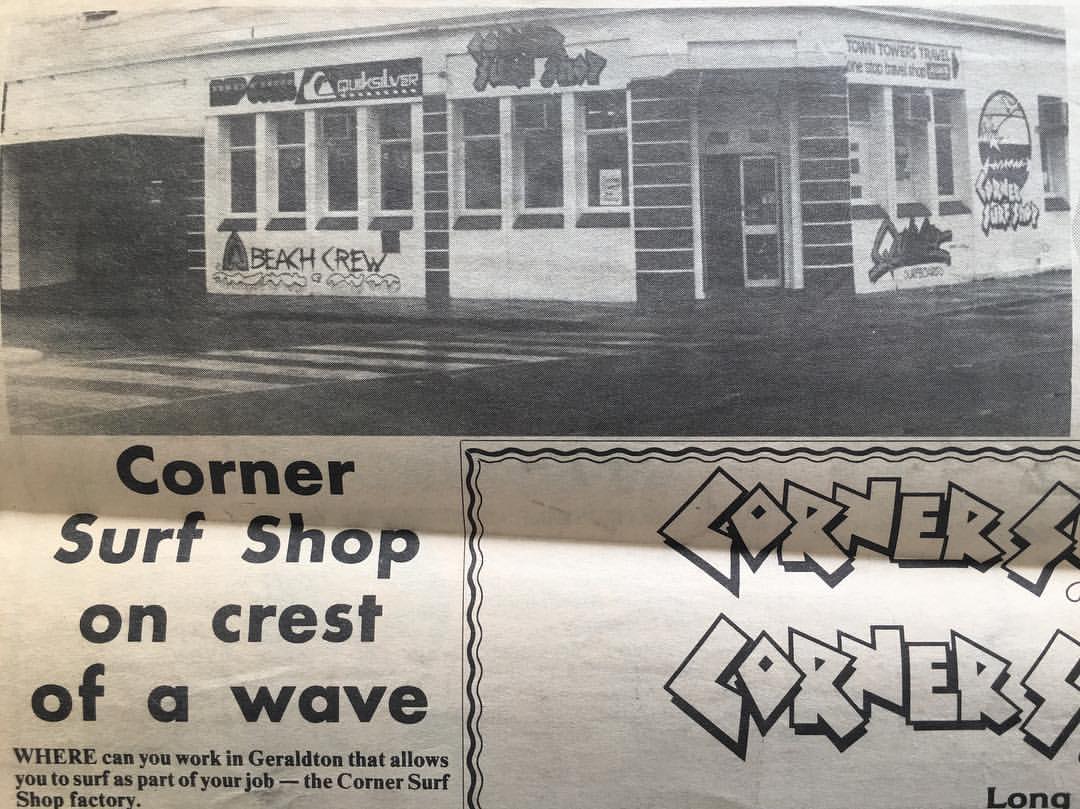 SBIA: Suzi, there’s wonderful history behind Corner Surf Store, what we love it about it too is the love story between you and Sam. Can you tell us a little more about where it all began?

Suzi: It was 1976 when Leon Norris came to Geraldton from Newcastle and decided to start a surf shop. The shop mainly sold boards from shapers such as Hot Buttered, McCoy, Neilson Brothers, Cordingley and local Perth shapers Col Ladhams and Len Dibben. It was mainly just boards back then and not much in the way of clothing or even leg ropes!  Forward on to 1984 and Leon was concentrating on his new business Los Amigos Mexican Restaurant (known to locals as Los of Memory) and decided it was time to sell Corner Surf. The deal was done with Sam over a beer and a handshake at the local Tarcoola Tavern. 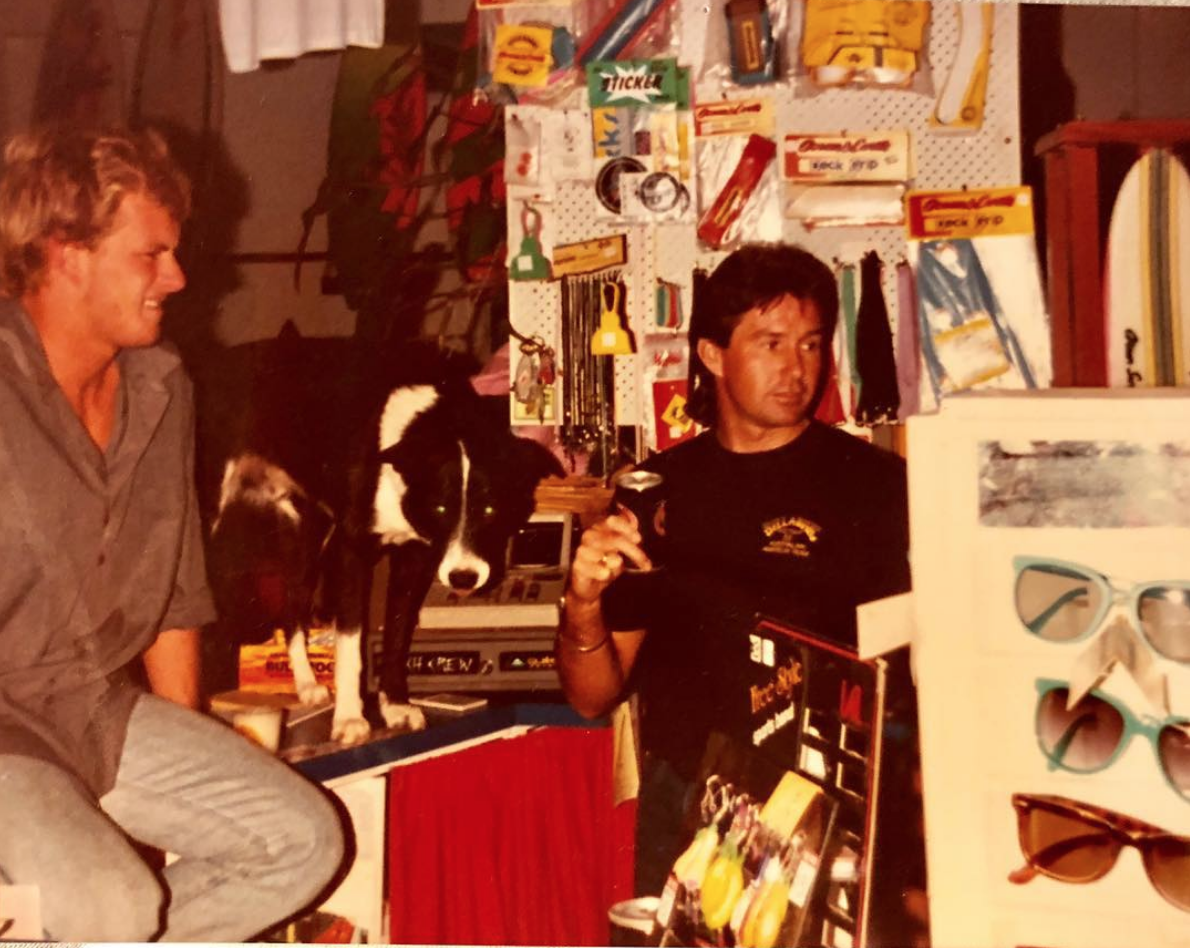 Sam and I met in 1985 through mutual friends and soon became a couple. Eventually I stepped in to do the ladies buying and pay the wages and bills.  A good start was making sure we had float in the till! We were always involved with the local Geraldton Boardriders Club and Sam was a natural with the grommets who loved his wicked sense of humour and caring attitude. Sam was surfer from a young age and grew up surfing Back Beach and then later on as an apprentice carpenter travelling to Kalbarri on surf trips and camping in the sandhills.

Corner Surf was the place to hang after school and Friday nights were usually a party. The boys from the factory would come in to get their wages and have a frothy and a few ciggies (I can’t believe we used to do this in the store and open the doors the next day – no worries after cleaning up the mess!). Sam and I were married in 1989 and 2 daughters followed, Jerri in 1992 and Coco in 1997.  We were a great team and worked well together, he was the surfer and the face of the store and I was helping with the buying and doing the accounts. We worked alongside each other in the store for over 20 years, building the business up from a small surf shop to where it is today.

Everything changed when Sam was diagnosed with cancer in 2010 ,which he survived and continued surfing – his greatest passion. Sam got away on five trips to the Maldives over the next five years with his mates were his surfing nirvana. Then in July 2015 he was diagnosed with Mesothelioma the fatal disease which is caused by asbestos.  Sam was a carpenter and in his early apprentice days had worked and been exposed to a lot of asbestos. Only 6 months later he passed away at home surrounded by friends and family.

I have chosen to continue running Corner Surf with the support of my amazing daughters  and who are both involved in the running of the store, our fabulous team, and the support of our incredible local community here in Geraldton. 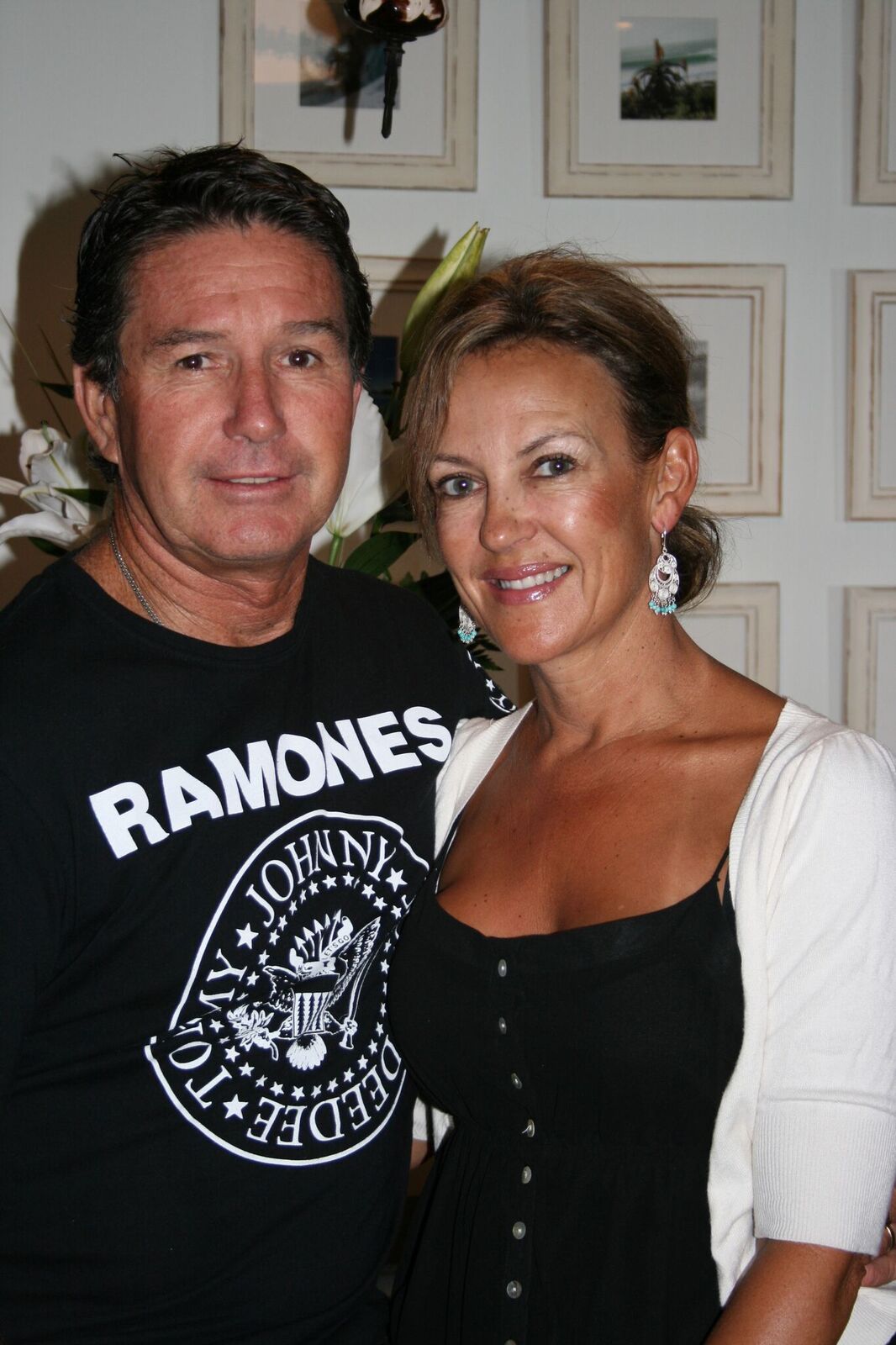 SBIA: Has Corner Surf Shop always been run as a family business?

Suzi: Yes since Sam took over in 1984 it has been run as a family business with both our daughters now involved in the running of the store. Coco is managing online and Jerri is doing the mens buying and stock input whilst travelling the world.

SBIA: How many staff members does Corner Surf Shop have?

Suzi:  We have 10 staff members. We are so lucky that some of our staff have been with us for many years. 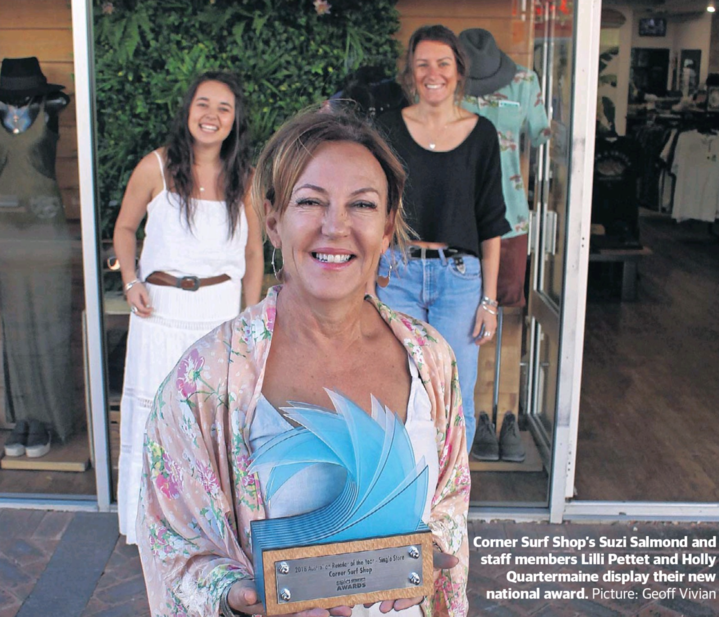 SBIA:  How has your product mix changed over the years?

Suzi: Our womens fashion has evolved to include Australian fashion as well as core surf brands,  this sits well with our surf brands to create a lifestyle store. I think we have evolved over the years to offer our customers a range of surf, fashion and lifestyle products.

SBIA:  What is the ratio of hardware to soft goods at Corner Surf Shop?

SBIA:  When did you start trading online? Has this worked well for your business?

Suzi: We started our online 6 years ago and updated in April 2018 to a fully intergrated e-commerce website. This has worked well for us mainly selling our Australian fashion labels. We were pretty early adopters of Facebook and Instagram and as our online following grew people would contact us on social platforms for updates and to get their hands on pieces from new collections – this made having an e-commerce site a pretty natural progression.

The new e-commerce site has already been fantastic for our local community, as well as exposing us to a larger national and international market. Locals can purchase something online so they know they won’t miss out and then pick it up instore. We’re even finding that people who used to live in town but have moved away are now buying online because they love our selection!

SBIA:   Can you tell us a little more about your support to the Geraldton Community?

Suzi: Corner Surf Shop believe in giving back to their community by supporting up and coming surfers through sponsorship and are a foundation sponsor of the local Geraldton Board Riders. We have supported Geraldton Board Riders since Corner Surf started in 1976. Sam was the President of the GBR for over 30 years and was actively involved in the club and surfing culture in the town.

We supported young surfers from the beginning with Sam taking carloads of prizes down south in WA for the various State Rounds and looking after a local talent with wetsuits and competition entry.

The annual Sunshine Surf Masters Contest which is held in Flat Rocks in Geraldton has been running since 1976. It is the biggest fund raiser of the year for the Geraldton Board Riders Club and has always been supported well by our incredible suppliers which we are very grateful for.

We also donate a cash amount every year and in recent years have supported the Junior Development Club with contest tees and prizes. We support local schools and clubs as much as we can and have a fantastic local charity, Midwest Charity Begins at Home. One year we managed to score one of Taj Burrows boards from Chris Slattery from Billabong which was auctioned off for a massive $10,000! We’re so lucky to have such an amazing, supportive community in the Midwest, the local community has been instrumental in the success of our business and giving back has always been a natural part of our business.

Suzi: In the earlier days Sam used to do all the advertising. Being quite artistic, he would design newspaper adds and script his own voiceovers for our radio advertising. In recent years I started the Facebook, Instagram and email marketing which is now being run by my daughter Coco and myself.

Sam also used to do the morning surf report on the radio in town. Every morning he would get up and drive around town to let everyone know where the best place was to catch a wave – rain, hail or shine. We even found photo’s the other day of the girls as babies out doing the surf report with him.

We have found that digital marketing and social media has made a huge impact on the business. The Instagram and Facebook started organically as a place to promote what was new in the shop and grew quickly within the community. Now there are a lot more tools at your disposal to be able to target your customers with advertising.

SBIA:  With Australia committing to a sustainable packing goal by 2025, can you tell us how Corner Surf Shop are working towards this?

SBIA: Does Corner Surf Shop have a loyalty program? What incentives are implemented for your customers?

Suzi: We have had a VIP Member Loyalty Card which has been running for over 20 years and offers customers 10%  discount.  Through having the loyalty card we have amassed a database to which we can send direct email marketing. Every customer who shops can be recorded in our POS system where we can keep a record of our customers purchases.

SBIA:  Your acceptance speech at the SBIA Gala Event had us all moved Suzi, it reinforced how passionate family businesses like yours are about the industry and we hope to see you back again next year at our annual event!

Suzi: Thanks so much we really enjoyed coming to Sydney and being involved in the whole event. Congratulations to SBIA for organising the Round Table which is very worthwhile to attend.

Next post Conner Coffin Joins SurfEars for the release of SurfEars 3.0

SBIA AWARDS SPOTLIGHT | SHOP FIT OUT OF THE YEAR