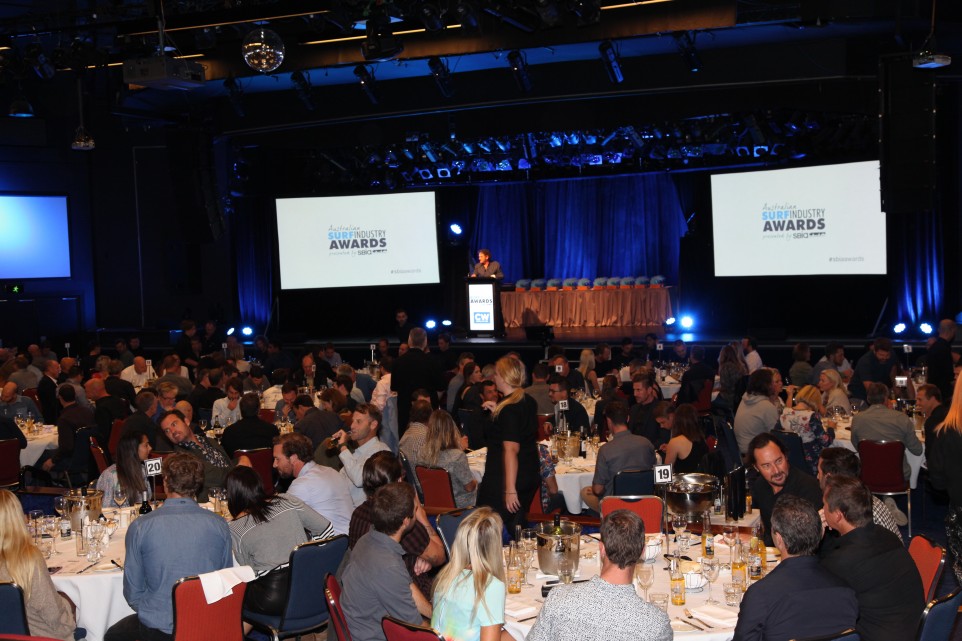 Both retailers and brands were recognised with 34 awards presented throughout the night, across a number of retail, product and marketing categories.

Highlights in the retail oriented awards included the Australian Retailer of the Year, won by Saltwater Wine/Stormriders, Aloha Manly winning the Core Boardstore award and Strapper Surf and Blunt Skateboarding Co the shop fit-out of the year.

”Winning the four major awards is a massive statement from our retail partners of the commitment and enthusiasm that Billabong brings to the Australian surf market. We’re very thankful and stoked to be recognised in such a way,” said Billabong men’s marketing manager Scott Hargreaves.

The coveted surfboard of the year was won for the second time running by Haydenshapes for its Hypto Krypto Future Flex. Surfing Australia was also recognised for all the work it does at a grass roots level for Australian surfing, winning the Service To Industry award.

SBIA president Anthony Wilson hailed the night as one of the best ever: “The Awards night is not only an opportunity to publicly acknowledge those excelling in our industry, but it’s also a real gathering of the surfing tribe.  It was a hugely successful night, made more so by having Mark Richards, Layne Beachley, Wayne Rabbit Bartholomew and Mark Occhilupo – all world champions and Australian surfing legends – on hand to present the awards.”

About Australian Surf Industry Awards:
The Australian Surf Industry Awards are held annually with entries opening January each year. The awards were launched in 2011 to celebrate the Industry’s outstanding Retailers, Products and Brands. With 34 categories ranging from Core Boardstore to Men’s Brand of the Year the Awards also recognise outstanding Service to the Industry.

2015 Breakthrough Brand of the Year
WINNER Afends
RUNNER UP Vissla

2015 Footwear Brand of the Year
WINNER Havaianas
RUNNER UP Reef

2015 Service to the Industry
Surfing Australia

Want to see who the 2015 Finalists were? Click me!