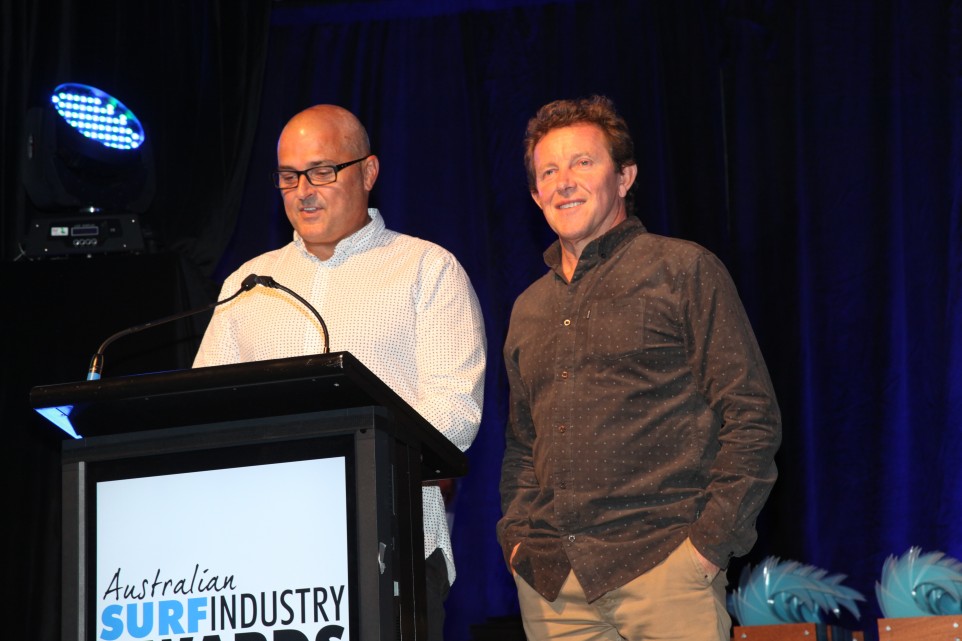 Changes to the Board

The SBIA AGM was also held in Coogee on October 27, prior to the start of the round table, and there have been a couple of changes to the SBIA board. Michael Di Sciascio (retail rep) and Steve Kay (brand rep) have left the board, their places being filled by Andy Ireland and Damian Campbell. Andy owns Saltbush Surf in Port Augusta and has been a long-term chair of ISRA and founding member of SRF while Damian is the Director of Sales for Oakley South Pacific/ Luxottica Group.

Both Mike Di Sciascio (owner of Strapper Surf) and Steve Kay (Rip Curl Australia CEO) have been valuable members of the SBIA board and key drivers in the development of the SBIA over the past few years.

In his president’s report to the AGM, Anthony “Macka” Wilson, made a point of mentioning the contribution Mike Di Sciascio has made over the years: “Mike has been a driving force of the Association since inception, without Mike’s vision and support it is likely SBIA may not have eventuated. On behalf of the Board and SBIA members I wish to thank Mike for his time, effort and enormous contributions to the organization and our industry.”

In his report, Macka also mentioned some of the initiatives undertaken by the board over the past 12 months, one of the major being”to provide more practical ‘how to’ information to retailers and to provide that information to as many retailers as possible.” To achieve this the board decided to make membership free for retailers and relaunch the website and email platforms and Wilson cites outgoing board member Steve Kay as the key to making it happen.

“Steve has been a driving force in our focus on elevating, up-skilling and educating our members through our newsletter and website,” he said. “I think SBIA and our industry have definitely benefited because of Steve’s input and I look forward to SK’s continued input and banter!”

A board meeting will be held this month to elect the office bearers and appoint the independent board member, the details of which will be published next month’s newsletter. In the mean time, here’s the president’s report to give you a run down on the SBIA’s activities over the past 12 months:

To achieve this we;

As noted above, Geoff Backshall resigned from the Board in February. Geoff has been a big supporter of SBIA from day 1. On behalf of the Board and members I wish to thank Geoff for his time, effort and contribution. Geoff’s departure in turn left the board with a casual vacancy, which at the Board’s invitation Paul Burdekin agreed to fill. Today also sees founding Board member and SBIA Secretary Mike Di Sciascio stepping down from the Board. Mike has been a driving force of the Association since inception, without Mike’s vision and support it is likely SBIA may not have eventuated. On behalf of the Board and SBIA members I wish to thank Mike for his time, effort and enormous contributions to the organization and our industry.

Strategic Review;
The July Board meeting doubled as our strategic review for the past year’s activities. As I mentioned in the introduction; where last year’s strategic review saw a significant shift in our approach, the end result of this year’s review is that we believe we are on the right track and will continue to bed down and refine our activities and events.

Australian Surf Industry Awards;
June saw our fourth Surf Industry Awards held at Twin Towns on the Gold Coast. This year’s awards were by far the most competitive and successful! While we didn’t manage to secure a Major Sponsor for Awards we did however lock in several category sponsors which helped ease some of the financial burden of the Awards. A major sponsor remains a focus for 2016 Awards where we will be making the following changes:

Possibly the most important SBIA event of the year was our annual Retailer v Brands tag team event. I’m pleased to say the “Retail All-starsɁ” took down the “Brands United” team in terrible conditions the morning of the Awards. Retailers now take a convincing 3 to 1 lead!

Finally, I’d like to acknowledge the work and efforts of the Board of Management who all give freely of their time for the betterment of our industry. Thank you to Reggae Elliss our Communications Officer and thank you to Amber Mann our Administrative Officer. I firmly believe our industry is in a better shape because of SBIA and our activities.