FIGHT FOR THE BIGHT 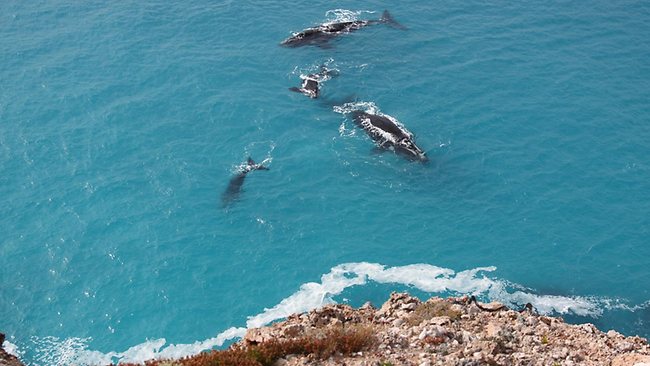 One of the major environmental issues concerning the Australian coastline in 2016 is focussed on the potential drilling for oil and gas in the Great Australian Bight and the Fight For The Bight campaign.  Given the disastrous oil spills seen in recent times in other parts of the world, Fight For the Bight has struck a chord with many people and is gaining momentum, attracting a coalition of surfers, the fishing and tourism industries and environmentalists.

The giant British petroleum company BP is pushing for exploratory oil drilling in the Great Australian Bight this year, its long-term plan to have four deep-water wells within Australia’s national waters in the Southern Ocean. BP has a poor track record and is the company responsible for the devastating Gulf of Mexico oil spill in 2010. Six years on from that catastrophe the affects on the marine life, environment and coastal communities are still being felt.

That spill lasted for 87 days, close to three months, before being capped and now BP is proposing exploratory drilling in the Great Australian Bight in waters “far rougher, far more remote and far riskier” than the Gulf of Mexico.

Before BP can start drilling it needs approval of an Environment Plan by the National Offshore Petroleum Safety and Environmental Management Authority (NOPSEMA). BP submitted a plan in October 2015, but it was rejected. BP is preparing another plan, which it will submit in an effort to be granted permission to drill later this year.

One of the requirements of the plan is the inclusion of the risks of the drilling and how those risks will be handled.  BP has made a number of general assumptions regarding risk management, including a “worst case” oil spill being 35 days. As shown by the 87 days it took BP to cap the spill in the much less remote and manageable Gulf Of Mexico, it could be argued that 35 days is more like a “best case” scenario.

Since the Australian Government has released new offshore oil and petroleum exploration licenses in the waters of the Great Australian Bight, BP and US Oil giant Chevron are the first Big Oil companies to express interest in exploring and exploiting the potential of the area. No doubt others will follow.

While protecting a pristine and unique marine environment like the Great Australian Bight is obvious motivation enough to oppose the proposed drilling, there are also economic considerations to be taken into account.  A significant oil spill would have a devastating affect on the Bight’s wild fisheries and aquaculture industries worth around $440 million per annum (2012–13) and regional tourism industries worth around $1.2 billion per annum (2013–14).

Then there is the real threat to thousands of kilometres of coastline and prime surf breaks. Given the wild nature of the southern ocean, large swells and the prevailing strength of the Roaring 40s, an oil spill would spread over a very large area.

Independent oil spill modelling commissioned by the Wilderness Society in South Australia, “clearly demonstrates that an oil spill in the wild waters of the Bight would devastate marine life, fisheries, coastal communities and seriously tarnish the clean, pristine image of Australia’s Southern Ocean and beaches.”

“The oil-spill modelling shows that the coastlines of all the southern states would be potentially under threat.”

The modelling is detailed and looks at the potential affects of a significant oil spill in summer and in winter. Here is an extract from the modelling and it shows that the coastlines of all the southern states would be potentially under threat:

Conducted by oceanographer and oil spill modelling expert Laurent C. M. Lebreton, MSc., the modelling shows that due to the strong winds and highly energetic waves of the Southern Ocean, the trajectories of an oil slick and particles have the potential to cover vast areas of Australia’s southern waters and coastline.

If a blowout and spill were to occur in summer, aside from the direct and severe impact in near water, the oil would very likely impact the shores of Western Australia. Simulations show oil contamination could reach as far as Albany and Denmark. Under these conditions, the model predicts that within four months, an area of roughly 213,000km2 would have an 80% chance of having surface oil thickness above levels likely to trigger the closure of fisheries. 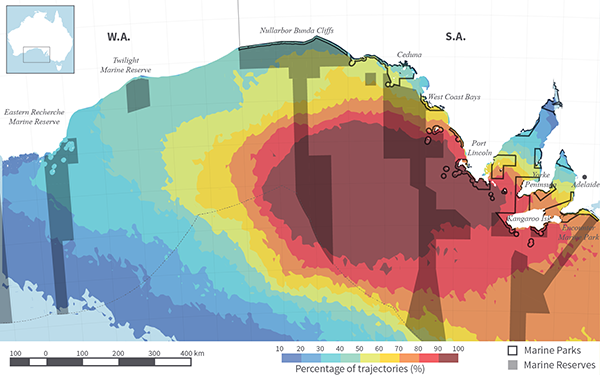 If a blowout and spill were to occur in winter, the oil would very likely impact the Eyre Peninsula, Kangaroo Island, and Spencer Gulf in South Australia, with simulations showing oil could impact much of the Victorian and Tasmanian coastline, right through the Bass Straight towards New Zealand. Under these conditions, the model predicts that within four months, an area of roughly 265,000km2 would have an 80% chance of having surface oil thickness above levels likely to trigger the closure of fisheries. 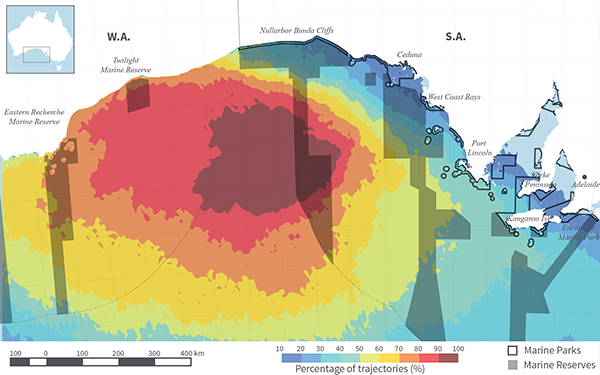 These potential impacts would devastate marine life, fisheries, coastal communities and seriously tarnish the clean, pristine image of Australia’s Southern Ocean and beaches. This is compounded by the fact that in the event of a well blowout — as uncovered by a Freedom of Information request from the Wilderness Society — BP would have to bring critical response infrastructure from Singapore (more than 4,800km away) and/or Houston, Texas (more than 14,000km away) and that if a relief well was needed this could take 157 days.

Obviously surfers and businesses along these coastlines have a vested interest and potentially a lot to lose if the exploratory drilling goes ahead. Many of those businesses are regional surf shops and surf schools, so it is an issue that concerns the surf industry as a whole.  If the worst-case oil spill scenario developed, we could even see oil contamination spread as far the pristine perfection of Jan Juc!

For more information head to http://www.fightforthebight.org.au

Previous post THE FORGOTTEN PEOPLE OF THE ELECTION CAMPAIGN